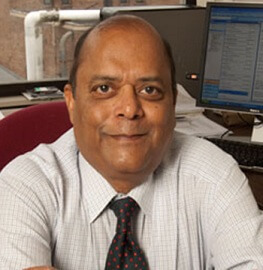 From 1978 to 1994, Professor Agarwal worked in various scientific and managerial positions at McDonnell Douglas Research Laboratories in St. Louis. He became the Program Director and McDonnell Douglas Fellow in 1990. From 1976 to 1978, Professor Agarwal worked as a NRC Research Associate at NASA Ames Research Center and as a Principal Research Engineer at Rao and Associates in Palo Alto, California from 1975 to 1976.

Over a period of 35 years, Professor Agarwal has worked in Computational Fluid Dynamics (CFD), Computational Magnetohydrodynamics (MHD) and Electromagnetics, Computational Aeroacoustics, Multidisciplinary Design and Optimization, Rarefied Gas Dynamics and Hypersonic Flows, Bio-Fluid Dynamics, and Flow and Flight Control. More recently, he has devoted some of his efforts in nanotechnology and renewable energy systems - in particular wind, solar and biomass. He is the author and coauthor of over 500 publications and serves on the editorial board of more than 20 journals. He has given many plenary, keynote and invited lectures at various national and international conferences worldwide. Professor Agarwal continues to serve on many professional, government, and industrial advisory committees.