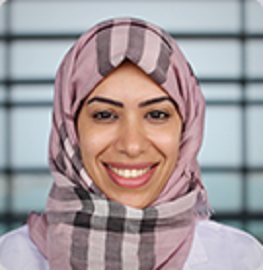 Dr. Anaam is a senior lab scientist at the R&DC* of Saudi Aramco, KSA. She hold a PhD. degree in Chemical Science
from KAUST**, KSA. She has 13 years of academic and industrial experience with focus on materials characterizations
in support of R&D projects and downstream and upstream operations utilizing several advanced analytical techniques
such as microscopies, spectroscopies and thermal analysis. Anaam has published 4 research articles, and 2 patents. She
has presented her work achievements at about 14 international and national scientific conferences. Currently, she is
working in the areas of catalyst developments for industrial applications, material failure and selection studies, and
corrosion investigations.